The pioneering sociologist and intellectual Stuart Hall died in 2014. He played a crucial part in developing the Centre for Contemporary Cultural Studies at Birmingham in the 1960s and 1970s, and for decades offered an inspiring and instructive influence with his writings on identity, representation and politics. Unsurprisingly he left behind an extensive library of the books, journal and papers that he had acquired over the decades. His widow Catherine Hall is now distributing this material: some of it, I understand, to an archive in Warwick. Some of the rest has been donated to the radical Housmans bookshop on Caledonian Road, for recirculation into the world of readers.

Informed of this by my colleague Dr Blacklock, I took an hour off in the blazing May sunshine and walked over to Caledonian Road, naturally reminded of The Shop Assistants’ ‘Caledonian Road’ (which was released on vinyl the month before Hall’s ‘No Light at the End of the Tunnel’, a powerful survey of Thatcherism in its pomp, appeared in Marxism Today). Housman’s general stock is high quality: contemporary novels, a lot of science fiction, politics and theory, the latest n+1 and Believer and lesser-known magazines too; plus postcards and badges with the E.P. Thompson-era slogan Protest & Survive. The general second-hand stock in the basement is very interesting and cheap too. Pierre Macherey’s ATheory of Literary Production was here for £3, a book that seemed a great prize when I was an undergraduate but is perhaps no longer read (come to think of it, it was no longer read when I was an undergraduate); perhaps I should have bought this copy, as my own (£2.75 from a student bookshop) came with an affixed Mr Men sticker that I always struggled to realize was not supposed to be part of the front cover.

But today was about Stuart Hall’s library. A selection of books were displayed on tables in the middle of the basement. A less prized set were going cheaper from a trolley. A great deal of what had come in had evidently already been bought up. Where are Hall’s copies of The Uses of Literacy or The Long Revolution? Gone either to the archive or to the first collectors to raid these displays. Yet here were nuggets still. Hall’s copies of two titles from Richard Hoggart, his great colleague at Birmingham. At least four books by global intellectuals of the next generation down from Hall’s, inscribed by them to him with thanks for his inspiration. One significant figure in the development of cultural studies signed their own book for Hall with an elegant tribute: Acknowledging many debts and registering a few disagreements – but then we all have our angels to wrestle with.

Numerous works were signed in Hall’s own easy hand, reliably sloping up the compass from South-West to North-East. Several of those carried underlinings (often in heavy black felt tip), discreet marginal markings and best of all, notes. Dr Blacklock, who made it to Housmans before I did, reports that he picked up a copy of Milton and Rose Friedman’s Free To Choose! in which Hall had sardonically commented: Utopia = Hong Kong! and Ah! The hidden hand! In the volumes I saw, underlinings tended to occur in the early pages of books, then to cease, save in an eccentric-looking little book on language called The Five Clocks. For some reason, the most heavily annotated texts I found were old copies of New Left Review, where underlining might start on an article halfway through the issue. Hall had paid close attention to Angela McRobbie’s 1988 interview with Juliet Mitchell, putting three separate ticks in the margin; and his black felt-tip had ringed the front-cover notices of articles on ‘Nightmares in Los Angeles’ and ‘Thatcherism and the Left’. But the prize goes to an instalment of Raphael Samuel’s ‘The Lost World of British Communism’, which Hall not only extensively underlined but extensively engaged with in the margin. At times he sagely comments quite so; when Samuel calls something ‘indescribably trivial’ Hall alarms the margin with two exclamation marks; elsewhere he seems actively to argue with Samuel, writing if only it were or is there a question about what are the ‘real movements’? I remember Perry Anderson writing of Eric Hobsbawm’s strange animus with Samuel’s work; these few pages suggested that Hall had experienced his own passionate, if less polemical, engagement with it.

The annotations of a major writer or thinker are fascinating to see. They might now be filed under book history or the burgeoning study of ‘material text’. I am inclined to say that in such markings we see Stuart Hall’s mind at work. But that seems a little misleading and redundant, for surely we already have his mind at work – in his many essays, introductions and interventions, or (if those aren’t ‘live’ enough) in the extensive film footage of him speaking. So the distinction must be finer: that the annotations are a level of thought as yet unpolished because still private. The annotations might tell us what Hall thought but was sometimes too polite to say in such terms: secret thoughts, not public ones. And they surely show us an earlier stage of the thinking process, working over its raw material, responding to ideas as he encounters them on the page rather than in the slightly later formulation of his own published writing. They also, of course, possess aura in a way that a Routledge volume of Hall’s essays doesn’t: the felt tip as the trace of the living body of someone you have only ever admired from afar.

But many of the books weren’t written in at all, and my greatest impression from the whole stock was of the printed texts themselves – their subject matter, their character, their range. There were curious outliers, like a very hefty book on dialect in New York. But a shape was discernable: an assembly and intersection of education, criminology, sociology, politics (two standard volumes on the British General Elections of 1974 and 1979). Linguistics, including a Hall-signed hardback of Halliday’s Language as Social Semiotic that I almost bought to replace my MA-era paperback. Just a little philosophy, and some colonial history. Much on the media, in what now feels a vintage mode: the pioneering books on the ideological constructions of television news. (This in the week when another furore about right-wing reporting on the BBC bubbled over, just as the government was attacked for trying to manipulate the politics of the BBC board; perhaps the politics of broadcasting and news are now conducted a little more in the open, with less need for 'decoding'.) One or two of the volumes of the Centre for Contemporary Cultural Studies itself. Screen Education, with a special issue on The Sweeney when The Sweeney was contemporary TV drama. Very little literature. I daresay that Hall, who started as a Jamesian, may have read and owned swathes of fiction or poetry, but they weren’t here (and nor were Donald Davie, Terry Eagleton or Catherine Belsey). Almost the only novel present was Last Exit to Brooklyn. I think I would buy Frank Kermode’s copy of that, but maybe not Stuart Hall’s.

It felt like a glimpse not just of Stuart Hall’s library, but of the library of an era. After Samuel’s ‘lost world of British Communism’, perhaps this is ‘the vintage world of British Cultural Studies’. That intersection of education, crime, society, media seems so poignantly representative of Hall, but he in turn thus feels representative of a milieu and period. Admittedly, a few texts here were more contemporary, from the last twenty years – but not many. The general impression was of a historic deposit, from a world three, four and five decades back in which people at polytechnics, art schools and new universities worked furiously to think these issues through and produce this printed stuff – often pamphlets and articles, as well as full-blown books. It’s a very familiar world of print to me, yet also different from today’s. I wondered what the difference was. The production of books, the quality of paper or font, cover design, no doubt. Also, perhaps, the earnestness. Much of this work seems to carry a conviction different from much academic work today. If I’m not just projecting that, I’d suggest it results from a few factors: the novelty of the relevant disciplines (like TV studies), with people vigorously staking out new and vulnerable ground; the different academic world, with no REF and perhaps a different set of attitudes to research and publishing; and the sense (perhaps exaggerated) of proximity to a political project (the New Left and its immediate successors). Some critical writing today (in feminist and black cultural politics, for instance) seems to carry a comparable sense of urgency and conviction; much, for good or ill, doesn’t.

I found it very poignant to contemplate this milieu of the recent past, and Hall’s particular participation in it – a creative, formative participation, though as the owner of these books he was ‘only’ a reader and responder, not a producer. Poignant too to think of the authors of the texts here: some dead, others retired, some who might now feel distant from the way they wrote in their intellectual youth. From where I stand now, it feels as though they were at least lucky enough to get their works into Stuart Hall’s library; works that are now coming out of the library, into a basement and back into the rest of the world. 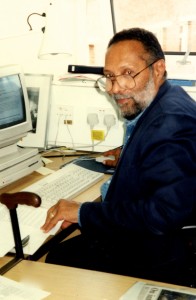