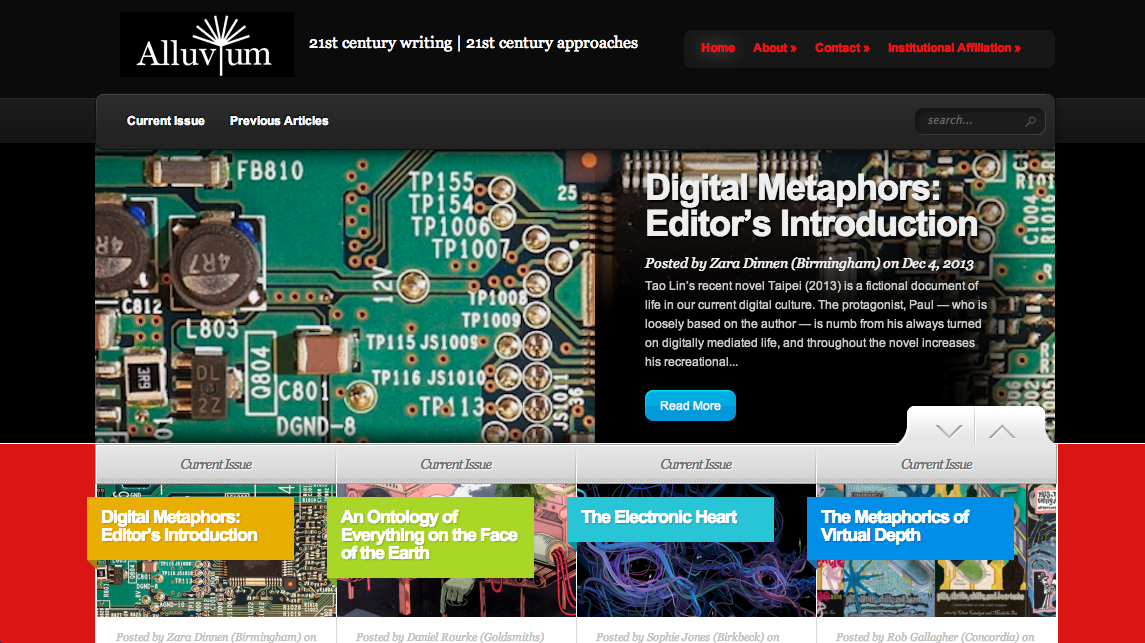 Alluvium is the official postgraduate journal of the British Association for Contemporary Literary Studies (BACLS). The journal is a leading open access publication dedicated to 21st-century writing as well as 21st-century approaches to the literary canon. Written and edited by promising early career researchers in the field, Alluvium offers topical short articles that are intended to reflect upon key issues and emerging trends in literature and literary criticism, and open up discussion through the site's message boards accompanying each piece.

Since it launched in June 2012, the journal has received widespread acclaim and has been recognised for opening up high-quality online scholarship in literary criticism. As a journal run through WordPress, Alluvium is breaking new ground for humanities scholarship and helping academic research to find new audiences around the world through its visually arresting design and the accessibility of its articles.

Alluvium is stored in the British Library’s ISSN electronic store, catalogued in the UK Web Archive, and preserved in the CLOCKSS scholarly archival service – offering rigorous digital preservation for all of its articles in the future. The journal is licensed under a Creative Commons Attribution license.

Below are some of the endorsements Alluvium has received from distinguished academic colleagues:

“Cleverly-thought out and well-designed, Alluvium is extremely fertile ground for new ideas about contemporary literature and theory. More, as an academic-run open-access journal, it’s playing a role extending the geography of serious academic publishing”.

“To visit alluvium-journal.org is to encounter what writing in the 21st century can be and do. Resolutely intermedia, resistantly accessible – to both writers and readers – Alluvium is carving out a new space for creative and communal attention to the work of imagination and critical thinking in the contemporary moment. An invaluable resource”.