James Joyce’s novel Ulysses (1922) takes place on the 16th of June, which has accordingly come to be celebrated each year – as ‘Bloomsday’, in honour of the protagonist Leopold Bloom. Celebrations in Dublin started in 1954, 50 years after the book’s setting, with a pilgrimage around the city by Patrick Kavanagh, Flann O’Brien and friends; in 1982, Joyce’s own centenary, it finally started to become the wider civic festival that it is for Dublin today. Around the world, many devotees of Joyce like to do something to mark the date: only a minority dress in Edwardian costume, but many gather to read from the novel. We have held such readings at Birkbeck in recent years.

In 2017, Birkbeck’s Bloomsday celebration was distinctive: an evening screening of two very rarely seen films about Joyce, organized by Michael Garrad – a cinema programmer and graduate of our MA Modern & Contemporary Literature – with the Birkbeck Institute for the Moving Image. It was heartening to see a large and engaged audience turn up to spend two hours in the dark, even on a sunny evening worthy of Joyce’s summery book. Michael Garrad expertly introduced the films, and held a conversation afterward with documentary film-maker Clare Tavernor and me.

The first film was Anthony Burgess’s documentary Silence, Exile and Cunning (1965). This black and white film of c.45 minutes was made in the BBC strand Monitor, pioneered by Huw Wheldon; the film was produced by Jonathan Miller who had emerged from the Beyond the Fringe set. The film thus exemplifies some aspects of British television culture in the 1960s: adventurous arts programming in the form of personal essay films, with auteurs and artists like Burgess given their head in a relatively free and experimental culture of programme-making. There is a risk of naively idealizing a televisual golden age of the 1960s and 1970s at the expense of the present, but it seems true that certain possibilities existed then because of a less bureaucratic system. Clare commented with amusement afterwards that Burgess’s method had been ‘I’m not going to interview anybody – it’ll just be about me’. His film is indeed centred around his monologue, delivered to camera on Dublin location or as voiceover. Burgess’s voice is punctuated by others reading from Joyce’s writings, including a Leopold and Molly Bloom who both sounded lower in class status than those we have come to know from the more recent CD renditions by Jim Norton and Marcella Riordan.

Burgess’s film is visually quite striking, using still images and close-ups of waves and water, as well as monochrome panoramas of Dublin Bay and scans across old photographs of the streets of Edwardian Dublin. In its use of a kind of montage along with Joyce’s words, it struck me that the film anticipated Joseph Strick’s film of Ulysses, shot at similar locations and released two years later. Burgess’s exposition places strong emphasis on Catholicism as a matter of guilt and struggle, with which he – calling himself a ‘renegade Catholic’ – openly identifies. He suggests that in embracing the story of Daedalus and the framework of Homer, Joyce fled from a pained Catholic world to one of ‘guilt-free Greek myth’. After the close of Molly Bloom’s monologue, one might expect the film to end – but Burgess takes it a stage further, with a riverine passage from Finnegans Wake. Burgess’s film shows some ambition in extending its coverage to Joyce’s most challenging work.

Joyce in June is a very different artefact. Filmed in the centenary year  of 1982, it starts as a biopic of Joyce, aged 22, in June 1904. Real events are depicted, like Joyce’s drunken collapse at Camden Hall where the National Theatre Society has been rehearsing. This version of the writer is talented and witty, yet also irritating and arrogant. The depiction might be uncomfortably, insightfully close to the truth about the young Joyce, in a way easily lost amid reverence for the artist. The film enters its second phase when Joyce poses for a photograph by his friend Constantine Curran, which will become the best-known portrait of this artist as a young man. Waiting for the camera to do its work, Joyce enters a reverie which takes up the next 50 minutes of screen time. It comprises an aftermath of Ulysses: Molly Bloom’s trip to Belfast on her concert tour with Blazes Boylan, along with a number of other vocal artists pulled together from Joyce’s pages (Bartell d’Arcy, J.C. Doyle, Fanny M’Coy the wife of C.P. M’Coy from the ‘Lotus Eaters’ episode), and piano accompaniment from Stephen Rea’s character: one Michael Macintosh, a version of the most elusive figures in Ulysses. During the trip Blazes Boylan proves ever more unscrupulous, then finally receives nominatively determined comeuppance by setting fire to his boot: a spectacle happily witnessed by Leopold Bloom who has made a surprise late entrance.

Michael Garrad suggested that the BBC had filmed the story because rights to Ulysses itself were unavailable. The resulting creative work is bizarrely offbeat (given that Joyce didn’t consider the outline of Ulysses itself till years later, it is odd that he is seen here already dreaming up its sequel), yet unique and entertaining. If the novel as a whole was legally off limits, its text doesn’t seem to have been, as the script is strewn with repurposed phrases from Joyce’s writing. It seemed to me that Joyce in June was among other things a more Wildean Joyce than usual: the author himself cast as an aphoristic drawing-room dandy, and his imagined narrative at times taking the form of farce. One of the many audience members at the screening was Bernard McGinley, a dedicated scholar of Joycean ephemera for decades. He reported that he had never seen either of the films: a good indication of what a rarity this double screening was, and how much obscure but fascinating material still waits to be rediscovered from the archives of British television. 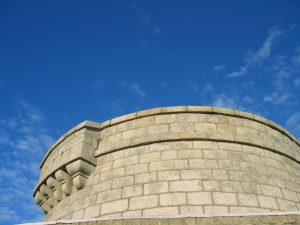