The Irish writer Flann O’Brien died on April Fool’s Day 1966. Fifty years on, we remember him with a special workshop. Flann O’Brien may no longer be our ‘contemporary’, belonging rather to the late-modernist generation of Samuel Beckett; but his legacy may be detected in the work of living writers, notably from Ireland: Paul Muldoon, Julian Gough, Kevin Barry. Meanwhile critics like Carol Taaffe, Jennika Baines and Maebh Long have recently worked to deepen our understanding of his writing.

In this commemorative session we will return to Flann O’Brien’s first novel, At Swim-Two-Birds (1939), considering again its innovations, challenges and comic delights, while also pondering its example for literature today. After an introduction to the author and text, we will consider key moments and issues in the novel, including:

The session will be led by Flann O’Brien scholar and specialist Tobias Harris, with Dr Joseph Brooker, Director of CCL and author of Flann O’Brien (Northcote House, 2005). 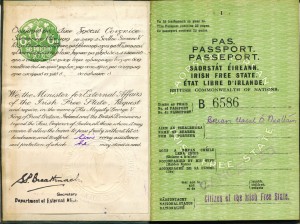