At the end of each year, critics like to put out their lists of highlights. In a similar vein, the following represents my own survey of the year 2019 in terms of the books and other media which affected my field of research.

My field is camp modernism. ‘Camp’ as in the aesthetic of exaggeration and parody, often with implications of identity, and literary ‘modernism’, as in the innovative literature of the early twentieth century. My argument is that the best examples of camp modernism in literature are the works of a British writer who tends these days to be overlooked, Ronald Firbank. Firbank published a series of novels from 1915 to his death in 1926, including Vainglory, Valmouth, and The Flower Beneath the Foot.  He is described in Susan Sontag’s 1964 essay ‘Notes on Camp’ as one of the two ‘conscious ideologists of camp’, the other being Oscar Wilde.[1]

In May 2019 Sontag’s essay was used as the theme to one of the biggest events in the American celebrity and fashion world – the opening gala for the summer exhibition at the New York Metropolitan Museum of Art’s Costume Institute. Or as it’s usually known more simply, the Met Gala. This year’s gala required guests to interpret the exhibition’s title, ‘Camp: Notes on Fashion’.

Among the guests was Billy Porter, the actor from the TV series Pose, which narrates the lives of trans people of colour during the New York drag balls of the late 1980s. At the Met Gala, Porter dressed in gold lamé as an androgynous Egyptian-like deity from the ancient world, carried on a litter by a group of half-naked men in similarly ornate Egyptian veils, matched more anachronistically with gold painted jeans. On Twitter, Porter supplied his own annotation to his costume: ‘The Category Is: Old Testament Realness.’[2] Viewers of Pose, or indeed RuPaul’s Drag Race, will recognise that statement as a catchphrase from drag contests. The serious implication is that camp plays with the idea of categories as received structures of power. Camp asks what defines such categories, who defines them, what they mean, and why they exist at all. I was reminded of the way that modernism, too, is a much-questioned category, and that it’s works like Firbank’s novels or Virginia Woolf’s Orlando (1928) which bring this interrogative aspect of camp into the category of literary modernism.

Happily for me, the catalogue accompanying the Met exhibition begins with a epigraph from Ronald Firbank’s Vainglory (1915), one which also relates to Billy Porter’s costume: ‘If we are all a part of God then God must indeed be horrible’.[3] As Firbank’s line suggests, among camp’s targets of categories and power is religion – Firbank particularly specialises in camp humour about Catholicism, as exemplified in his last novel, Concerning the Eccentricities of Cardinal Pirelli (1926). The irony about the Met Gala, of course, is that the event itself is a demonstration of a type of power in 2019, namely the power attributed to celebrities and fashion designers. The use of the Sontag essay as a theme, meanwhile, suggests that ‘Notes on Camp’ has become a kind of religious text in itself on the subject of camp, with Sontag herself now an intellectual deity, much worshipped and much consulted. Though thankfully, not unquestioned herself: 2019 saw the publication of a major biography of Sontag by Benjamin Moser, which portrayed her, not always kindly, as a camp icon herself – a self-mythologising intellectual diva.

One result of all this camp discussion in May was that journalists were suddenly talking about my field of research.  Sometimes they got their facts wrong. The BBC news site ran an article which gave the origins of the word ‘camp’ as appearing in the Oxford English Dictionary in 1909.[4] It actually appeared in a semi-humorous dictionary of slang in 1909, but the OED, like most mainstream dictionaries, did not include the word until the early 1970s. Pointing this out isn’t mere pedantry but an important reminder about the way mainstream dictionaries reflect and support the power structures of the era in which they are published. Consequently, my thesis had a renewed sense of purpose – not just to correct inaccuracies but to raise awareness of the serious implications behind camp.

2019 also saw the publication of a major academic book in my field, Decadence in the Age of Modernism, edited by Kate Hext and Alex Murray. The book recognises ‘camp modernism’ as one of the ‘many manifold modernisms now in play’, and names Firbank as an example of one such camp modernist.[5] Regarding Firbank’s reputation in 2019, the editors note how ‘critics have seemed irredeemably uncertain about how to make sense of his legacy’.[6] As my full thesis title is ‘Ronald Firbank and the Legacy of Camp Modernism’ it felt that this book alone justified my thesis. The thought that other scholars were calling for more work to be done in my field was highly motivating.

Three books of creative work relevant to my field came out in 2019, by three writers who not only use camp in their work but who use the gender-neutral or non-binary pronouns ‘they/them’. This suggests that there’s a very contemporary appeal to camp, which is sometimes thought to be old-fashioned or dated. I was gratified to see that the shortlist for the 2019 Goldsmiths Prize, which celebrates new experimental fiction, included We Are Made Of Diamond Stuff, a novel by Isabel Waidner. Waidner is a writer I’m already using in my thesis as an example of camp modernism in contemporary fiction. As one critic pointed out, Waidner ‘aligns their work with a generation of postwar experimentalists exploring class and culture with a camp and baroque cleverness.’[7] Specifically, Waidner has stated that they are inspired by the post-war writer Brigid Brophy, who in turn wrote the most substantial book on Ronald Firbank to date, Prancing Novelist (1973).

Another writer I’m using as an example of contemporary work in this field is the transgender performance artist La John Joseph, who in 2019 published the text of two plays, A Generous Lover and Boy in a Dress. In the past La John Joseph has named Firbank as a direct influence. While Firbank’s reputation is still cultish and obscure, Woolf’s Orlando is one work of camp modernism that seems more influential than ever. The new novel Paul Takes The Form of A Mortal Girl by Andrea Lawlor adapts the basic idea of Orlando as a gender-changing adventure in history, and transplants it to the 1990s, specifically the queer student scene in San Francisco. Just as Orlando is full of in-jokes about Vita Sackwille-West’s life and ancestry, Paul… is full of humorous references to books of queer theory, and novels with queer themes. A soft toy animal, for instance, is given the name of Aloysius, which some readers will recognise as the teddy bear from Evelyn Waugh’s Brideshead Revisited (1945).[8]

Another camp reference to Brideshead Revisited appeared in the second series of Killing Eve. The character Villanelle was shown in Oxford, dressed in a very arch ensemble which might described as Brideshead Drag – or possibly Brideshead Cosplay. Just like the character of Sebastian Flyte in the 1981 TV adaptation of Brideshead, Villanelle wore a pristine men’s white shirt and tie, light vintage slacks, and a light knitted jumper worn over her shoulders, with the sleeves knotted together. In Philip Core’s 1984 book, Camp: The Lie That Tells The Truth, not only is Brideshead Revisited discussed as an example of camp, in the sense of amplifying the stereotype of Oxford students dressing in this pristine, flamboyantly wealthy and boyish way, but the city of Oxford is also considered camp in itself. In its sense of too-much-ness, the image of Oxford is, as Core puts it, ‘a cliché, an eternal simile for vanished youth’.[9] This scene in Killing Eve reminded me that Core’s words, written in 1984, still apply. Moreover, it’s a reminder that Evelyn Waugh’s original novel itself makes a connection between camp and Oxford and modernist literature, when the flamboyantly gay Anthony Blanche stands on a college balcony and recites TS Eliot’s ‘The Waste Land’ through a megaphone.[10]

Finally, the year also saw the documentary You Don’t Nomi, which premiered at the London Film Festival in October. The film explores the curious change in reputation of another film, the 1995 big-budget erotic drama Showgirls. Showgirls was considered artistically poor on its release, yet it has since become an accidental camp classic, in the sense of ‘so bad it’s good’. Sontag calls this the ‘failed seriousness’ of camp. Accordingly, You Don’t Nomi asks why a bad film from the 1990s appeals to drag queens and gay creative artists of today. This is a question my research also tries to answer. One theory is that camp embodies a queer refusal of identity as depth, claiming instead an exaggerated surface as a new space – a safe space –for identity to flourish on its own terms. Exaggeration produces both the idea of there being a perceived ‘norm’ in the first place, along with a new, noisier and denser version of this norm, while still operating entirely on the surface. This may be one reason why seemingly disposable films like Showgirls can attain an extended afterlife through camp: to be all surface and no depth is, paradoxically, a kind of invulnerability.

By way of a postscript to this survey of camp in the arts, it further needs to be acknowledged that 2019 was also the year when the word ‘camp’ was used by political commentators, like John Harris in The Guardian, to describe Boris Johnson’s style of cartoonish self-presentation.[11] If there is a reason behind the new rise of camp in the arts, and the new rise of camp in politics, it is tempting to indicate the present digital world, with its sense of too much information and too much imagery. In a time of such noise, perhaps only the most exaggerated surfaces can cut through.

Dickon Edwards is a postgraduate research student in the Department of English, Theatre & Creative Writing at Birkbeck, University of London. 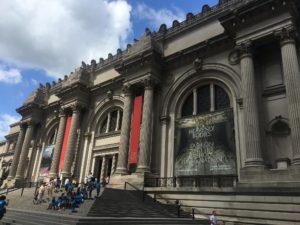 Image of the Metropolitan Museum of Art, New York City, by David Wilson, used under a CC BY 2.0 licence.