Released in the UK as part of a limited run, Shin Godzilla (translated as ‘True’ or ‘God’ Godzilla) stands as an oddity in the ever-changing Godzilla franchise. For those unacquainted with its history, the series stereotypically brings forth images of bad dubbing, even worse special effects and a narrative emphasis on giant monster wrestling. Yet, like many pop culture icons of the twentieth and twenty-first centuries, the Godzilla creature has continued to evolve, not least with Gareth Edwards’s recent underrated 2014 US reboot Godzilla, which returned to the social commentary of the original 1954 Godzilla, whilst updating both its effects and message for a modern-day global audience.

While Edwards’s Godzilla may have functioned as a Hollywood interpretation of the monster, Shin Godzilla reinvigorates the infamous monster for a modern Japanese audience, providing something its contemporary cohorts have yet to offer. While many of its predecessors may have focused on big-budget effects and large-scale destructive set-pieces, Shin Godzilla acts as a satirical black comedy; one that attempts to address the key political concerns of a twenty-first century Japan, particularly regarding the governmental response to the 2011 Tohoku earthquake, tsunami and Fukushima Daiichi nuclear disaster.

At first glance, the film’s structure follows the conventional ‘Kaiju’ or Japanese ‘mysterious monster’ movie template.[1] Reimagined as the physically largest interpretation of the creature to date, the film begins with Godzilla rising from the Pacific, threatening to come ashore. As it does, the Japanese government struggles to respond against the creature, which appears to evolve at an accelerated rate, rapidly transitioning from a larval stage to that of the bipedal, nuclear-damaged, saurian behemoth with which audiences are familiar. After many millions of dollars’ worth of property damage, and a constant to-and-fro between the near-invulnerable monster and the military, the Japanese eventually uncover an ingenious way to defeat Godzilla using an experimental coagulant to freeze the beast’s core, thus saving both Tokyo and the earth from the beast’s continued rampage.

Yet, despite such a conventional structure, as noted, the film nevertheless offers a somewhat fresh and intuitive take on the series. While the Godzilla monster’s portrayal might be construed as following its predecessors by being readas an allegorical representation of contemporary Japanese specific environmental terrors, the film also takes a specific swipe at what were widely considered the Japanese Government’s failings following the 2011 triple-disaster. For many within the Japanese public and even the worldwide media, the 2011 disaster only highlighted the inadequacy of the government’s response; with a lack of communication, inadequate disaster preparations and the delay of emergency aid to the disaster sites, each being cited as key failings of a highly bureaucratic system.[2] Not only this, the Government’s continued use of Japanese honorifics also came open to much criticism from some quarters, suggesting an outdated system of tradition, which lacked the leadership required to take control of the situation.[3] 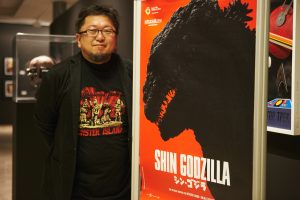 Above: Co-Director Shinji Higuchi with a poster for Shin Godzilla (2016).

Image from Donostia Kultura, used under a CC BY-SA 2.0 licence.

Within Shin Godzilla, such criticisms are brought to the fore with an absurd but wiry ridicule. From the very beginning of the film, directors Hideaki Anno and Shinji Higuchi immediately highlight the supposed inadequacies of the Japanese response to what appears to be an exceptionally slow-moving creature. Meetings are held by numerous government ministers in various board rooms before any decision is made, while the subtitled positions of such personnel grow comedically in length as the film goes on. Not only this, the monster’s screen time is interspersed in short bursts between such scenes, giving the impression that untold destruction is happening offscreen, while the politicians fumble over their decisions.

When Godzilla finally evolves into its larger, more powerful form, the military response is not nearly as immediate as in previous Hollywood ‘Kaiju-inspired’ blockbusters such as Cloverfield, Pacific Rim, or even Godzilla 2014. In one scene, an arsenal of helicopters, tanks and missile platforms converge around the beast and await their instructions, which must then go through a complex chain of approval before they can fire. Inevitably, such weapons prove to be ineffective against the monster, offering a humorous but effective demonstration of an immobilizing, ineffective bureaucracy that is constricted by red tape and hierarchical egotism.

Thus, when the beast finally unleashes its trademark atomic breath on Tokyo, the attack works as a somewhat purifying fire; one that removes the old guard, whilst forcing a newer, leaner, less-traditional and more forward-thinking government to take its place. In this sense, Shin Godzilla critiques the traditions of the old conservative Japan and demands that a newer, more proactive order be installed. For a series normally characterized by what William Tsutsui describes as a focus on ‘Japanese nationalism’ (particularly at the expense of other nations such as the US), Shin Godzilla offers a somewhat alternate angle; one that attacks Japan for its inadequacies when protecting its people.[4]

Yet, despite such changes to the Godzilla mythos, Shin Godzilla does not forget the legacy of its forbears. From the creature’s nuclear origins, to the nostalgic integration of the original Godzilla theme within the film’s score, Shin Godzilla continues to celebrate the traditions of the King of the Monsters, whilst not shying away from telling its own unique story.

Such a synthesis of tradition and innovation culminates at Shin Godzilla’s conclusion. With the beast subdued, the film ends on a silent, lingering shot that reveals a group of human/Godzilla hybrids growing from the monster’s tail. Almost mimicking the hypothetical studies regarding the ‘Dinosauroid’ in paleontology, the film perhaps implies that had Japan failed to react and defeat Godzilla, the creature’s final continued evolution would not have stood as a larger, more powerful monster, but instead as a smaller, more communal or social lifeform.[5] Within this final shot, Shin Godzilla therefore not only follows the traditions of the original Godzilla by providing a warning regarding the government’s failure to respond, it also rejects what has been one of the franchise's key characteristics (and even the tagline for Roland Emmerich’s 1998 Godzilla). For with such an evolution, Shin Godzilla arguably states that after all the city-wide devastation, after all the looming shadows and giant monster beatdowns, size doesn’t matter after all.

Craig Thomson is a writer and postgraduate student whose research interests include monster theory, popular culture and gothic literature and film. He has recently undertaken an MA in Contemporary Literature & Culture at Birkbeck with a dissertation on the presentation of ‘the ecomonstrous’ within three different incarnations of the Godzilla monster.