Two members of Birkbeck's Centre for Contemporary Literature appear in the new issue of the journal Crossings, produced from the University of Dhaka. The issue, edited by Professor Shamsad Mortuza, is a special volume on the work of Karl Marx, revisited from contemporary perspectives, and derives in part from a conference on Marx at 200 held in 2018. Contributors to the volume hail from a range of geographical locations, including Bangladesh, Denmark, the United States. Some of the articles represent a reading of Marx from an Asian perspective.

Amid this diversity of contributions, the volume also contains an essay by Birkbeck's Joseph Brooker on representations of working-class life in the 1980s, drawing on the socialist critic Raymond Williams; and an Marxian analysis of the television drama The Fall by Sean O'Brien, until recently Director of our MA in Contemporary Literature & Culture and now a Research Fellow at the Department of English, Theatre & Creative Writing.

The whole volume is Open Access and can be read here. 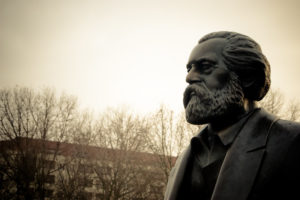 Image by fhwrdh, used under a CC BY 2.0 licence.