Contemporary Literature and the End of the Novel

Home » Articles » Contemporary Literature and the End of the Novel

The novel, it is safe to say, is not what it used to be. The contrast between the form’s current status and its illustrious past is probably most apparent to those of us who both read novels for pleasure and study, teach, or research them for a living — or the hope of a living. In the last decades, it seems that the pleasure of reading has become an ever more rarified affair — beleaguered as it is by the newly available gratifications provided by visual and digital media; at the same time, and in marked contrast, the academic study and teaching of the novel, as it has come to focus ever more on the traffic between the literary and the social, has not ceased to remind us of the novel’s formative role in shaping and sustaining many of the crucial institutions of modern life: the bourgeois individual, the nation-state, empire, and the police. Without the modern novel, we simply wouldn’t have modern life as we know it. It is hard to say the same about the novel and early twenty-first-century life.

Yet novels continue to be written and read, and many of them are not nearly as defeated or exhausted as the mismatch I sketched above would suggest. Indeed, what if the patent absurdity of claiming a crucial cultural role for the contemporary novel in fact liberated contemporary writers to imagine different forms of life? What if contemporary fiction decided to inhabit the aftermath of the traditional novel and of the forms of life it used to imagine and support and to instead explore new forms of experience, of life, and of affect, and design new formal possibilities? Not a robust individualism, but a form of creatural life constitutively exposed to human and nonhuman others; not redemptive experiences of empathetic identification, but awkward sensations that do not fit existing emotive registers; not the satisfaction of cosmopolitan connectedness, but the terrifying confrontation with radically nonhuman scales.

My new book, Contemporary Literature and the End of the Novel (Palgrave, 2015), tries to map the paradoxical productivity of such attempts to render the traditional operations of the novel inoperative. Many contemporary novels, I found, deliberately neutralize the devices through which the novel has traditionally done its cultural work — things like psychological depth, sociological scope, emotional solicitation — in order to force themselves into the uncharted territory beyond novelistic comfort, and beyond unraveling modern forms of life. A concern with the traditional cultural role of the novel form and with its current diminished prospects helped me make sense of some of the literary projects that have, in recent years, seemed most ambitious and challenging to me — and therefore most in need of mapping: the work of Tom McCarthy, whose demolition of novelistic realism in Remainder I — and many readers with me — could not help but find suspiciously realistic; the late fiction of J. M. Coetzee, which ruthlessly abandons its decidedly unsexy protagonists in a terrain where no novelistic manoeuvers (say, a marriage or an inheritance, or simply love) will save them; Teju Cole’s Open City, which subtly refuses to deliver the triumph of the cosmopolitan imagination that it seems to promise; or Dana Spiotta’s Eat the Document, a novel that rethinks the politics and ethics of literature in the aftermath of 9/11 while studiously sidestepping the context in which it intervenes. Contemporary Literature and the End of the Novel argues that these projects — and those of James Meek, Hari Kunzru, and Lars Iyer — can best be understood together as so many determinate negations of the traditional novel that make room for so many efforts to explore new forms of embodied life and affective connection.

In 2011, Nancy Armstrong, one of the éminences grises of the study of the novel, noted that we needed new terms to describe the forms of life that contemporary fiction intimates. “Though the effort is certainly underway", she writes, “we have yet to develop an analytic vocabulary comparable in precision to narration, plot, point of view, setting, and character, terms that activate the themes of a lost community based on one-to-one identification.” The novels I analyze deliberately deactivate such a mimetic model of togetherness, in their efforts to imagine different forms of connection; this makes them particularly useful theoretical objects to contribute to a new vocabulary that is commensurate to contemporary fiction’s formal innovations. This ambition has led me to bring the novels I read in dialogue with a number of interdisciplinary fields: discourses of the Anthropocene (the vast scales of which surface in novels as diverse as James Meek’s We Are Now Beginning our Descent and Teju Cole’s Open City), biopolitics (which helps theorize the peculiar precariousness of the human lives these novels imagine), affect theory (which broadens the emotive spectrum beyond a customary focus on trauma), and posthumanism.

Ultimately, I like to believe that it is the novel’s increasing redundancy in contemporary culture that (perversely) makes it an adequate tool for thinking disavowed dimensions of contemporary life. Quoting Theodor W. Adorno, Sianne Ngai has remarked that “bourgeois art’s” — and there is no more bourgeois art than the novel — “reflexive preoccupation with its own ‘powerlessness and superfluity in the empirical world’ is precisely what makes it capable of theorizing social powerlessness in a manner unrivaled by other forms of cultural praxis.” Contemporary Literature and the End of the Novel stages a dialogue between the contemporary novel and theoretical and critical discourses that share in the struggle to map contemporary forms of disempowerment; as a diminished form, it remains an invaluable resources for intimating forms of vulnerability and weakness that remind us of the need for a re-empowerment to come. 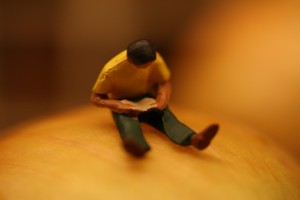 Image by Hilde Skjølberg, used under a CC BY-NC-SA 2.0 licence.