In Absolute Power (1997) Clint Eastwood plays a burglar who laconically states: ‘I love true crime’. I always found it entertaining that Eastwood’s next film as an actor was called True Crime (1999). These were fictions referring to a genre of non-fictional narrative, which capitalizes on a public appetite for details of crimes that have really taken place. The critic Mark Seltzer has written a major work on the genre, describing it as ‘crime fact that looks like crime fiction’. But what about ‘true crime fiction’? What does that look like?

Our interest in staging a conference on the topic arose in part from the work of co-organizer Dr Mark Blacklock, who had published his own true crime novel and had become aware of a growing field of such works. With generous support from the Birkbeck Institute for the Humanities, Blacklock and I set up True Crime Fictions at Birkbeck to hear what others had to say about the area. We were gratified to find exciting proposals coming in for papers at the conference, which, as Blacklock said at the outset, continues an exploration of genres and genre hybridity that has been recently undertaken at Birkbeck. In this report I will offer a brief record of the conference as I saw it.

Our first panel was on ‘Northern Crimes’. Het Phillips (University of Birmingham) started the conference with an exceptionally interesting and eloquent discussion of materiality in true crime. While Phillips drew in a wide range of references, mentioning crime writing from the Moors Murders to David Peace, what most struck me was her emphasis on detail as a textual feature of crime writing. Detail might be a literary relative of the detective’s ‘evidence’; reading could be forensic attitude. Phillips referred not just to Roland Barthes’ account of detail in ‘The Reality Effect’, but even, strikingly, to Hugh Kenner’s discussion of material details in Joyce’s Ulysses.

Martin King (Manchester Metropolitan) continued with a paper that was very different in form yet equally engaging. Referring to co-written papers that he had produced from his base in health and social care, King’s approach was oriented to social science and media studies. His focus was particularly on David Peace’s Nineteen Seventy-Four and the TV dramatization Red Riding, and on the versions of masculinity explored in both. One of King’s suggestions was that Peace cannot be wholly separated from a more prurient representation of gruesome crime. What Mark Blacklock called ‘culture industry questions’ – where is a fiction situated, who is the audience, whom does it benefit, is there profit to be made? – come into play.

Helen Pleasance (York St John) closed this panel with a paper that was again very different yet compelling. Pleasance spoke from a creative writing background, in which creative non-fiction and memoir were key genres. She revealed a personal connection to the investigation of the Moors Murders, via her father who was a probation officer in Greater Manchester at the time. This had deterred her from engaging with the history of that crime – yet she has ultimately been unable to avoid it, and spoke of ‘what it means to know too much about Myra Hindley’. Both Phillips and Pleasance discussed a number of different works about the Moors Murders, factual and fictional. Pleasance criticized Jean Rafferty’s award-winning novel Myra, Beyond Saddleworth (2012) but found much more virtue in David Constantine's story 'Ashton and Elaine' which she described at length. Constantine’s story, it emerged, addresses the murders obliquely and looks to find a way beyond them for the region.

The panel not only highlighted the particular role of the North in crime writing, but also suggested that two cases in particular have dominated the modern history of ‘Northern crime’: the Moors Murderers and the Yorkshire Ripper. Of the two, it seems to me that the former has had the deepest hold over public imagination and has been more prone to mythologization – as was indicated, for instance, by the connections that various quotations drew between the Moors Murders and Wuthering Heights.

The second panel shifted our attention over the Atlantic. David McWilliam (Keele) described what he called the ‘activist ethics’ of author Sarah Burns’ work on the ‘central park five’, a case of wrongful conviction. McWilliam’s clear and forthright presentation opened issues of race, representation and incarceration in the United States. These were also pertinent to the presentation by historian Roger Panetta, who had joined us from Fordham University in New York. Panetta is undertaking a history of Sing Sing Prison. His work thus took us away from contemporary crime and back to the nineteenth century, as he outlined the work he seeks to produce – one which will better describe the prison’s inmates, ‘retracing the lifelines knotted in one cell’. Adam Gearey from Birkbeck’s School of Law then discussed a work by the former Weatherman activist Bill Ayres, taking ‘true crime’ into the realm of what could be called ‘domestic terrorism’ or home-grown revolutionary activity in the counterculture era. Gearey’s emphasis was not so much literary, legal or political as philosophical, drawing on Aristotle to emphasize ideas of virtue and self-fulfilment, and suggesting that bad rhetoric indicates bad ethical action.

Our third panel encouraged more discussion of graphic art. Harriet Earle (Birkbeck) could not be present on the day but her paper was read out for the audience. Earle’s discussion of comic book art offered tools for formal analysis, with the comics My Friend Dahmer (2012) and Green River Killer (2011) her particular examples. Earle’s lucid account stayed admirably focused. Based at Leeds, David Platten came to us from David Peace country, but his presentation was on the fiction (written and graphic) of French communist author Didier Daeninckx. Platten showed how Daeninckx had returned repeatedly to the incident of state brutality on 17th October 1961, when Algerian protesters were murdered by police. A question from the audience raised what Platten acknowledged was a central issue: how state-sanctioned violence relates to the category of ‘crime’.

In the final two sessions of the day, we moved from criticism towards creative practice. Professor Martin Eve chaired a panel of authors who had in different ways written about true crime. Mark Blacklock spoke of his novel I’m Jack (2015), which fictionalizes the Wearside hoax that diverted police attention from the Yorkshire Ripper investigation. Andrew Hankinson is the author of You Could Do Something Amazing With Your Life [You Are Raoul Moat] (2016), a narrative based on extensive study of the Geordie killer’s statements and actions. And Daragh Carville (who teaches creative writing at Birkbeck) spoke of his authorship of a forthcoming BBC drama about the Shankill Butchers of Belfast. Two points struck me from this rich discussion. One was the intensity of the material. Author events and interviews (‘where do you get your ideas’?) can often stay at a genial, genteel level; but here, I gradually realized that all three authors had engaged with deeply disturbing and violent material, sometimes in forensic detail. This in turn raised ethical issues – who has the right to write true crime? What about the feelings of the victims’ families? Can you be sued for libel? – which were aired in discussion.

The second point that connected the three was an emphasis on place. Hankinson’s Geordie background connected him to the Moat case. Blacklock talked of his Sunderland background as his crucial motivation, even of his novel as an ‘exorcism’ for his home town. And Daragh Carville spoke of his love for ‘that weird city’, Belfast: a little like Helen Pleasance in her initial avoidance of the Moors Murders, he had avoided the Troubles all his writing life, but here at last he found himself confronting it directly. This intense concern with place – specifically with towns and cities – in turn made me wonder how large a city would need to be to transcend the effects of a particular crime. Sunderland, for instance, is a city of 175,000. Would London, at nearer 8 million, be too large to be haunted by one individual’s actions? True, Jack the Ripper and the Krays are notorious London criminals, but they are also very closely associated with the specific area of the East End. Perhaps the last crime to feel ‘London-wide’ in its effects was the 7/7 bombings: a murder case belonging to that special category called terrorism.

The day closed with a presentation from Line Kallmayer, a visual artist from Denmark who is currently resident in Italy after several artistic residencies in different countries, notably the United States. She described the case of the serial killer Dennis Lynn Rader, who was caught in Wichita, Kansas in 2005. Kallmayer gave us a narrative of Rader’s life and crimes, but it was intertwined with an account of her own travels in Kansas investigating the case. True crime was mixed with memoir. But it was also a profoundly visual presentation, as Kallmayer’s text was accompanied by a sequence of many photographs that she had taken on her travels. The effect was extraordinary. The academic format of the day was now incorporating a work of art, which accordingly asked for a different response. The quality of Kallmayer’s writing was matched by her immaculate reading and the intriguingly uncertain, Sebaldian status of her images. I already thought that we had witnessed a day of high quality work, but Kallmayer closed it by taking it to a different place, and making us listen and watch differently.

What could the future hold for the study of true crime? Is there more discussion or publication ahead? I hope that this conference has started the conversation in a way that delegates will find helpful as they continue their research on true crime fictions. 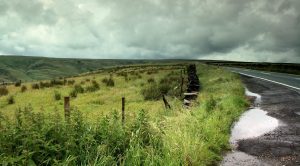