The Perverse Universals of the Microeconomic Mode

Home » News » The Perverse Universals of the Microeconomic Mode

The Centre for Contemporary Literature at Birkbeck is delighted to host Dr Jane Elliott (KCL), who will be delivering a guest lecture based on research developed in her recent monograph, The Microeconomic Mode: Political Subjectivity in Contemporary Popular Aesthetics (Columbia University Press, 2018).

The Perverse Universals of the Microeconomic Mode

From pop phenomena such as Game of Thrones and The Hunger Games to the literary triumph of Jesmyn Ward’s Salvage the Bones, the microeconomic mode redefines human being as the intersection of inescapable embodiment, threats to survival, and what Elliott has called binary life, or the conviction that humans always choose to exist at the expense of other life. In this talk Elliott will consider the consequences of binary life for longstanding debates regarding the role of suffering, spectatorship and compassion in the recognition of universal personhood, via readings of recent films such as Wind River (2017), and Avengers: Infinity War (2018). In contrast to the dramas of inclusion and exclusion that structure narratives regarding the extension of personhood to formerly excluded forms of life, binary life produces a perversely universal version of humanity equality, in which every single conscious human being must choose whether to stay alive at someone else’s expense. Elliott argues that this radically absolute definition of human equality interrupts the hierarchical transactions of the sentimental imagination in ways that are restructuring the imagination of material injustice in the present.

Jane Elliott is Reader in Contemporary Literature, Culture and Theory at King's College London. She is author of Popular Feminist Fiction as American Allegory: Representing National Time (2008) and coeditor of Theory After "Theory" (2011).

This event is held in conjunction with the MA Summer Programme at Birkbeck, and with the MA Contemporary Literature & Culture. 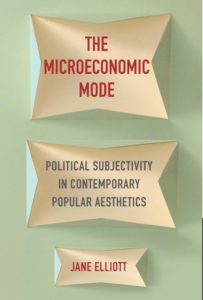