Stranger Than Fiction: an Evening with Travis Elborough

Home » News » Stranger Than Fiction: an Evening with Travis Elborough

As part of Birkbeck's Arts Week 2014, the author Travis Elborough will be appearing at Waterstone's bookshop in Gower Street to discuss his work.

Travis Elborough has most recently become known for co-editing the bestselling volume A London Year (2013) with Nick Rennison. For each day of the year, the book offers excerpts from numerous London diarists throughout the city's modern history.

Prior to this project, Travis had already published extensively on a distinctive range of topics. His books include The Bus We Loved (2005), a history of the Routemaster; The Long Player Goodbye (2008), a study of vinyl LP records also published in the United States as The Vinyl Countdown (2009); Wish You Were Here (2010) on the English seaside; and the unusual slice of cultural history London Bridge in America (2013). He has also co-written the brand new film How We Used To Live (2014) by director Paul Kelly and the members of the pop group Saint Etienne. The film uses archive footage of post-war London, from which the image above is taken.

At this special event in Waterstone's, Travis (pictured below) will reflect on diaries, London, and the practice of historical research and non-fictional writing that unites his diverse body of work.

The event is free: you can reserve a place here. 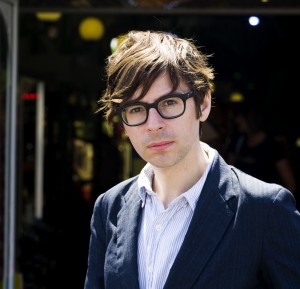