On 25th January 2017 the acclaimed novelist Eimear McBride came to Birkbeck for a public conversation with Professor Jacqueline Rose. One of the college’s largest lecture halls was filled by an audience keen to witness what was not just another book-tour stop but a notable meeting of minds, facilitated by a collaboration between Birkbeck Institute for the Humanities and the Centre for Contemporary Literature.

Various relations can exist between creative writers and the critics who read them – from incomprehension to symbiosis. My colleague Professor Martin Eve, in his recent book Literature Against Criticism (2016), explores the ways in which recent fiction has competed with academic criticism for rhetorical sway over theoretical ideas. Yet Rose and McBride remind us of the possibility of a productive and sympathetic relation between artist and critic, as has often enough happened in the past – from Ruskin and Turner to Barthes and Robbe-Grillet. A particular critic can seem to be an artist’s ideal audience, or can take a particular role in paraphrasing the artist’s novelties and significance to a public; they might even, in a positive feedback loop, have a beneficial effect on the artist’s own understanding of what they’re doing. Rose was one of the first academics to speak in public on McBride’s first novel A Girl is a Half Formed Thing (2013), before reviewing her second novel The Lesser Bohemians (2016). At this event Rose commenced by speaking of how McBride’s work had affected her, and suggested that McBride was a writer she had been waiting for. (Presumably, on this model, one only fully discovers what one has been waiting for when it arrives.)

In their different ways, both writers traverse strongly related territory: gender, sex, violence, abuse; psychic and ideological structures of power (notably, in McBride’s case, those of the Catholic Church); psychic troubles and breakdowns; and the way that all of these are enacted in language and literature. On the night, the discourses of Rose and McBride were slightly contrasting: one trading in eloquent long sentences, the other tending to brisk, down-to-earth replies. But a slight difference of idioms can be no bad thing, offering different ways of seeing and addressing the same issues. The conversation was neither narrowly academic in a way that excluded the language of creative writing, nor non-academic in a way that dismissed serious reflection, but a respectful, exploratory negotiation of ways of speaking about fiction. Here are a few specific, discrete moments from the conversation, roughly transcribed.

Rose: This is the most terrifyingly anticipated second novel.

McBride: At least by me.

Rose: You are high-risk.

McBride: I do my best.

Rose: You’ve taken modernism – Woolf, but especially Joyce – and added visceral sexuality. In Ulysses Gerty on the beach is quaint, Molly Bloom is lyrical: but you are the return of the repressed of modernism.

McBride wanted A Girl is a Half Formed Thing to be bodily, so there are no names or dates to get in the way: she tried to give the reader the most unmediated access possible to the girl. The reader shouldn’t even be aware of her, the author.

McBride read Joyce’s Ulysses on a train and it was a transformative experience: nothing would be the same again. With the writing that came from reading him, she couldn’t get published – so it was all his fault. She admires Joyce not as a model to copy but for showing what was possible: a freedom with language.

With The Lesser Bohemians, McBride wanted to show the Irish experience in London in the early 1990s – depicting not a negative immigrant experience in which the migrants all pine for home, but a positive one in which people have found a good life abroad.

In creating characters, McBride draws on her experience at drama school: including the lesson that as an actor you can’t just create a type, you must play a specific person.

McBride describes the writing process of The Lesser Bohemians, across 7 drafts. It’s very interesting to hear that she wrote the book as a realist novel, to be clear what was happening – then went in and changed it to make the initial ‘dull prose’ more interesting. She suggests: ‘The unconscious doesn’t do a lot of rhyming – you have to revise for cadence’.

McBride describes seeing the stage version of her first novel, heavily abridged: ‘It seemed like – here’s a bad thing … here’s  a worse thing … and here’s the worst thing of all – and that’s the end’. She reflects: ‘It wasn’t my book – it was parts of my book’. Would she be interested in writing a play? ‘I might be … sure I might have a go’.

A selection of photographs from the event has been posted online. You can also listen to the event again as a podcast. 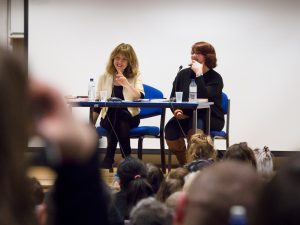