Penda’s Fen is a 90-minute television film made for the Play for Today slot and screened in 1974. Its content and history are discussed already on a post here. Though received with interest at the time, it then dropped out of sight for over fifteen years, and did not truly come back to view till the twenty-first century. In 2016, when Penda’s Fen had earned the phrase ‘cult film’ more than most, it was issued on DVD by the BFI. A year later, two postgraduate researchers from Birkbeck’s Department of English & Humanities, Matthew Harle and James Machin, organized a conference, Child Be Strange, at the BFI to celebrate and explore the film, ahead of a commercial screening. The Centre for Contemporary Literature supported this conference, and two of its members – Professor Roger Luckhurst and I – have contributed to a subsequent volume that developed from the conference and was published in late 2019.

Of Mud & Flame, edited by Harle and Machin, is the fullest assembly of material on Penda’s Fen that is ever likely to exist. It contains versions of papers given at 2017’s event (including Roger Luckhurst on contexts of the 1970s, Adam Scovell on the subgenre of Folk Horror, Carolyne Larrington on women in the film, and Beth Whalley on Medieval sources), along with wholly new essays, interviews with key actors from the film, a foreword and afterword by scriptwriter David Rudkin, and the entire script of the film. A remarkable demonstration of the richness of the film, the book also represents the outcome of a collaborative process initiated by Harle and Machin at Birkbeck. In February 2020, events were held to promote the book, at the BFI, London Review Bookshop, and Whitechapel Gallery. On 29th February I attended the last of these events, where the film was introduced by the erudite Medievalist Beth Whalley and the unstoppable curator Gareth Evans.

I must now have seen this film half a dozen times, but this was the first on the big screen. It made me concentrate differently and see even more than several previous viewings had highlighted – like the detail of the music, the Dream of Gerontius, in the first scene; the whole motif of the dissonant musical representation of God had passed me by. Most of the film is now so familiar, to so many, that it could be a Rocky Horror Penda Show, cult-TV fans intoning the dialogue as it comes. The scenes don’t, though, follow a very obvious order; apart from protagonist Stephen Franklin’s gradual journey from conservatism to discovery, they feel discrete, as though they could often be sorted into another sequence and work as well. The film contains many supernatural scenes – ‘visionary’ is the preferred word – but they are all reduced to the status of ‘but it was all a hallucination’ by Stephen turning round every time and finding the supernatural visitant gone. That makes the film naturalistically coherent, yet also somewhat routinised and contained; every visionary moment is psychologised, so something as elaborate as Sir Edward Elgar’s discussion of his life and music is implicitly something that Stephen has dreamed up. But David Rudkin doesn’t seem to see it that way: in the Q&A afterward he talks specifically about how metaphysical visitors like the angel are really here in the world and the way it’s shot indicates that. One evident exception to all this is the drunken car traveller who is burned on the Fen: that’s real in the film’s material world, and never explained. He claims to be burned by ‘the man in the fire’: is that a truly mystical presence? Or some version of the film’s political paranoia about nuclear bunkers and atomic research? The ‘realist’ explanation here hardly feels more plausible than the ‘fantastic’ one.

The film contains so much. It’s remarkable that they’ve made a 350-page book about a one-off TV play, but then it’s remarkable what it deals with. The countryside, region, England / Wales and the border; Elgar and classical music; theology including heresy (it’s tremendous how the rector, the main religious authority around, is also the greatest religious sceptic, reluctant even to say that he believes in God); mysticism; early-Medieval history; fertility, childrearing and adoption; sexuality, especially homosexuality; political issues of the 1970s (industrial relations and the nuclear secret state); conservative education with a military bent; language, place names; contemporary controversies around censorship, the Festival of Light, Mary Whitehouse. The erudition is what especially makes it, as all say, unrepeatable now, even as it rests on a quite conventional coming-of-age format. Its one abiding weakness, to my mind, is the hokiness of the final chosen-one narrative with King Penda’s preposterous, though resonant, benediction.

The Q&A after the film is the best of its genre I’ve seen in a long time. Christopher Douglas (who in the film plays languid schoolboy Honeybone) is now a radio dramatist (he created Ed Reardon’s Week on Radio 4!), and acts here not as interviewee but as a judicious host. David Rudkin is 82, bearded, in a pullover, clutching a microphone he occasionally raises to make it useful. Spencer Banks is now quite unlike Stephen Franklin: down to earth, modest, generous, jovial. It’s staggering to realize that the two actors haven’t seen Rudkin in forty-seven years until lunch today. For that matter, two more of the original cast, Ian Hogg and Jennie Heslewood, are in the front row. I’m sure I’ve never attended any artistic event that reassembled people after such an epochally long time apart, let alone immediately generating such spontaneous rapport between them.

Douglas asks about the source of the script – was it rooted in place, in Rudkin’s autobiography, or in news stories of the time? How did director Alan Clarke react to it? (Rudkin repeats an anecdote I’m sure I’ve heard before: Clarke, script in hand, asked him ‘Do I have to read a lot of books for this?’, and Rudkin replied: ‘Just one, and you’re holding it’). Banks recalls being aged 19, uncertain what it was all about, going through unusually extensive rehearsal and trusting Alan Clarke. It’s funny how even very serious works like this often generate light-hearted activity in production: their stories aren’t about finding the heart of darkness in the Malvern Hills, but about their frustration at staying in a temperance hotel, or playing practical jokes on each other on location. Rudkin has a gift of not saying too much, so it weighs more. He says that Clarke and David Rose should be here, and apropos of lighting adds, combining the literal and figurative with immense grace: Alan shone light. Wherever he went.

A fortnight after this screening, it would hardly have been possible to hold it. By then, galleries, theatres, cinemas, events of all kind were shutting their doors, and crowds being dissuaded from gathering, as Coronavirus arrived in Britain. In fact the UK's first death from the virus happened the day before this unique screening. If you’re confined to your home most of the time at the moment, and don’t yet know Penda’s Fen, you couldn’t discover a much richer vision of British strangeness. You might even want to read the book. 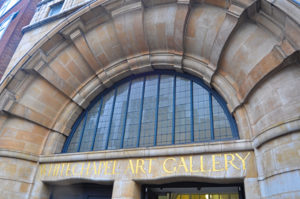 Image by Clive Varley, used under a CC BY 2.0 licence.