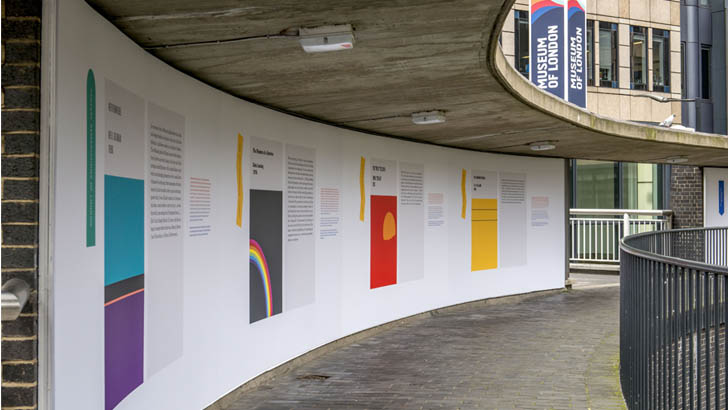 Birkbeck's very own Dr Caroline Edwards has curated a new display at the Museum of London on Imagined Futures. The display was commissioned as part of the year-long City Now: City Future programme of events and the design work was undertaken by Martin McGrath Studio. The display is installed at the Museum's Rotunda terrace, is free to access and will be up until April 2018.

Of all cities, London is one of the most widely represented in literature. During the 19th century, when it rose to prominence as the centre of the British Empire, London was considered the peak of civilisation. However, this achievement was matched by the violence of a colonial system that damaged the places and peoples from which the city drew its vast wealth, in India, Africa and the Caribbean.

London therefore made the ideal setting in which to imagine future visions – in books that destroy the metropolis through scenes of devastation, or rebuild it as a fairer society. From Mary Shelley’s disaster novel, The Last Man (1826), to H. G. Wells’s techno-utopian vision in The Sleeper Awakes (1899), London established its reputation as a city in which to enact different visions of the future in literature.

In the 20th century, such imagined futures became increasingly bleak, particularly in the post-World War II period, and by the 1970s writers were experimenting with surreal future London landscapes. More recently, London has become home to the leading characters in influential books for younger readers, such as J. K. Rowling’s Harry Potter series and Neil Gaiman’s Neverwhere (1996). In the 21st century, as we come to terms with the environmental impact of climate change, the city has once again found a new role as a literary setting.

This display was curated by Dr Caroline Edwards, Senior Lecturer in Modern & Contemporary Literature at Birkbeck, University of London, and designed by Martin McGrath Studio. Quotes reprinted by kind permission of the authors/publishers.