In March 2015, the future was staged again, this time in Tempe, Arizona. The second international conference on science fiction theatre, Stage the Future II, was hosted by the Center for Science and the Imagination at Arizona State University and took place in the Marston Exploration Theater in the ASU’s Tempe campus. The event lasted two days, March 6-7, and was organised by myself and Susan Gray (the conference’s founders) and a large organising committee, including Carol Stewart from Bellarmine University, Prof. Carrie J. Cole from Indiana University of Pennsylvania as well as a local team from ASU, Prof. Boyd Branch, Prof. Erica Hughes and Miranda Giles. I’d like to thank both visitors and hosts for helping bring this to life. Finally, I am of course grateful to our delegates; many of them had come a long way to get to Arizona for the event.

Unfortunately, our first keynote speaker, the theatre critic Howard Sherman didn’t make it to the conference due to a weather-related flight cancellation. We were fortunate however to welcome ASU’s own Prof. Thomas Seager whose keynote was titled “The Story of Science”. An engineering professor himself, he talked about the relation between science and art and how each needs the other – science fiction being of course a great example of how art can help scientists speculate about possible solutions to the problems they’re researching; it was an excellent talk that would be a solid introduction to any science fiction event and truly kickstarted the conference.

This was followed by the first panel. Prof. Carrie J. Cole spoke about the Uncanny Valley in sci-fi theatre and argued for a Thespis Test (like a Turing test but for robot actors). Next we had ASU’s Prof. Melissa Thompson who presented her performance work as “Ambien Cassandra” and Carol Stewart who gave a thought-provoking paper on sci-fi theatre and method acting (Robin Abrahams had some interesting thoughts to blog about this).

Next was a panel – appropriately titled “Pop! Goes the Science Imagery” – in which Jeff Sachs from ASU presented a case study of the London-based immersive theatre company Punchdrunk and Doctor Who’s The Crash of the Elysium, an immersive Theatre experience for 6-12 year olds – Sachs talked about the freedom it gives to children and “how much influence/agency children have over the performance”, Robert Kroll from Jackson College discussed (via skype) Reality vs Continuity in the Doctor Who Proms (part of the BBC Proms series) and the kind of, in his words, “total sensory theatrical experience” these provided “by making the concerts simultaneously separate from and part of Doctor Who continuity” and finally there was Corporal Outis who, in his stormtrooper’s uniform, talked about “The sci-fi fan as performance artist.”

Corporal Outis delivers his conference paper in a stormtrooper’s uniform

In the next and final panel of the first day, we were blessed to have both the artistic director of the Science Fiction Theatre Company of Boston, A. Vincent Ularich, and the company’s literary manager, Kelley Holley. Ularich gave a talk on sf theatre and diversity titled “The Future is Heterogeneous” – discussing his own company’s emphasis on “gender parity and diversity” (for instance, to quote from the abstract, “at least half of the shows produced through the company are written by female playwrights”). This was followed by Paco Madden’s paper on the “Revenge of the Nerds” (a.k.a. the rise of Geek Theater; for example, Paco mentioned the work of Vampire Cowboys Theatre Company), Holley’s paper on Nomadism in sci-fi theatre, arguing that nomadism is a common theme in science fiction and that science fiction theatre is an ideal medium for nomadism to be explored (she mentioned Bella Poynton’s The Aurora Project as an example), and, finally, Catherine Sarah Young’s skype presentation “Climate Change Couture: Haute Fashion for a Hotter Planet” (check out Catherine’s Apocalypse Project here).

The second day started with a presentation by Arizona-based Orange Theatre’s Matthew Watkins who talked about the company’s production of Solaris (you can find more about the company and their work here). Next was Prof. Yeliz Biber Vangolu who had come all the way from Ataturk University of Turkey to speak on dystopian visions in the plays of Caryl Churchill. The panel concluded with a stunning video presentation of the work of the artist Miwa Matreyek (you can view her TED talk on performance and animation here). 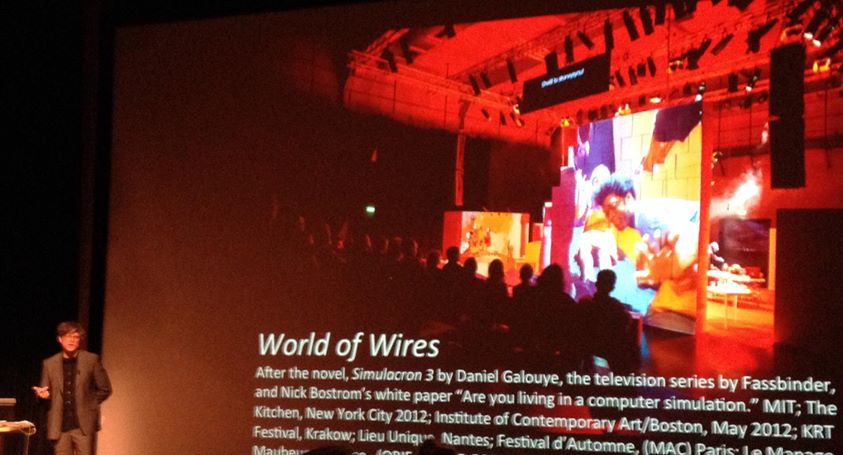 Next was a fascinating keynote speech by theatre director Prof. Jay Scheib from MIT whose talk was titled “Recollections of Future Performances, an Assessment: Simulated Cities / Simulated Systems” and included video material from his work. He also referred to his “Bellona, Destroyer of Cities”, inspired by Samuel R. Delany’s Dhalgren (see here for the New York Times piece on the play).

Last but not least, there was the “Making Manifest: Calls for Futures” panel, which started with Little Brother Mojo’s “Musical Manifesto” which included live music performance (you can listen to their work here), followed by Susan Gray’s paper, “To see A World in a Grain of Sand – Metaplastic Membranes for Staging Science Fiction”, (great metaphor of the Greek Chorus as social media), my own paper “First as tragedy then as Sci-Fi: Sci-Fi Drama as a Return to Theatre’s Roots” in which I argued that the history of theatre is cyclical and science fiction theatre and drew some parallels with sci-fi theatre and ancient Greek tragedy, and finally there was a talk by Dr. Robin Abrahams, research associate at Harvard Business School, who spoke about the relation between science theater and sci-fi theater titled “Mental Models of Science (Fiction) Theater.”

The conference concluded with a plenary discussion with artists from the Emerge Festival which was also taking place in ASU at the same time; these included Prof. Lance Gharavi, Dan Fine, Camilla Jensen and Matthew Ragan. Then, Carol Stewart, Susan Gray and myself announced two future projects. First of all, the 3rd Stage the Future, which will most likely take place in Kentucky in Spring 2016 and will be organised by myself, Carol, Susan and Kentucky theatre director Bethany Morse. And secondly, Parallax, the first science fiction theatre festival of Louisville, Kentucky, which I’m currently organising with Bethany and Carol and which is going to take place in Louisville this June.

To keep up-to-date with Stage the Future, you can like the event on facebook or follow us on twitter (@stagethefuture). And feel free to use the conference hashtag, #stagethefuture to get a glimpse of what that future has been so far, or join the discussion. Also, for more information on the Parallax sci-fi theatre festival, that event is also on facebook and on twitter as @ParallaxLou. Finally, as mentioned in the first conference’s report, do consider joining the wonderful Forum for Science Fiction in the Theatre on facebook. And always remember this:

Keep calm and stage the future.

Dr Christos Callow Jr. is an Associate Tutor at Birkbeck, University of London – where he has recently completed his creative writing PhD on “Etherotopia.” He is also playwright, actor and the artistic director of the theatre company Anodos Productions.

Banner image by J D Hancock under a CC BY license.